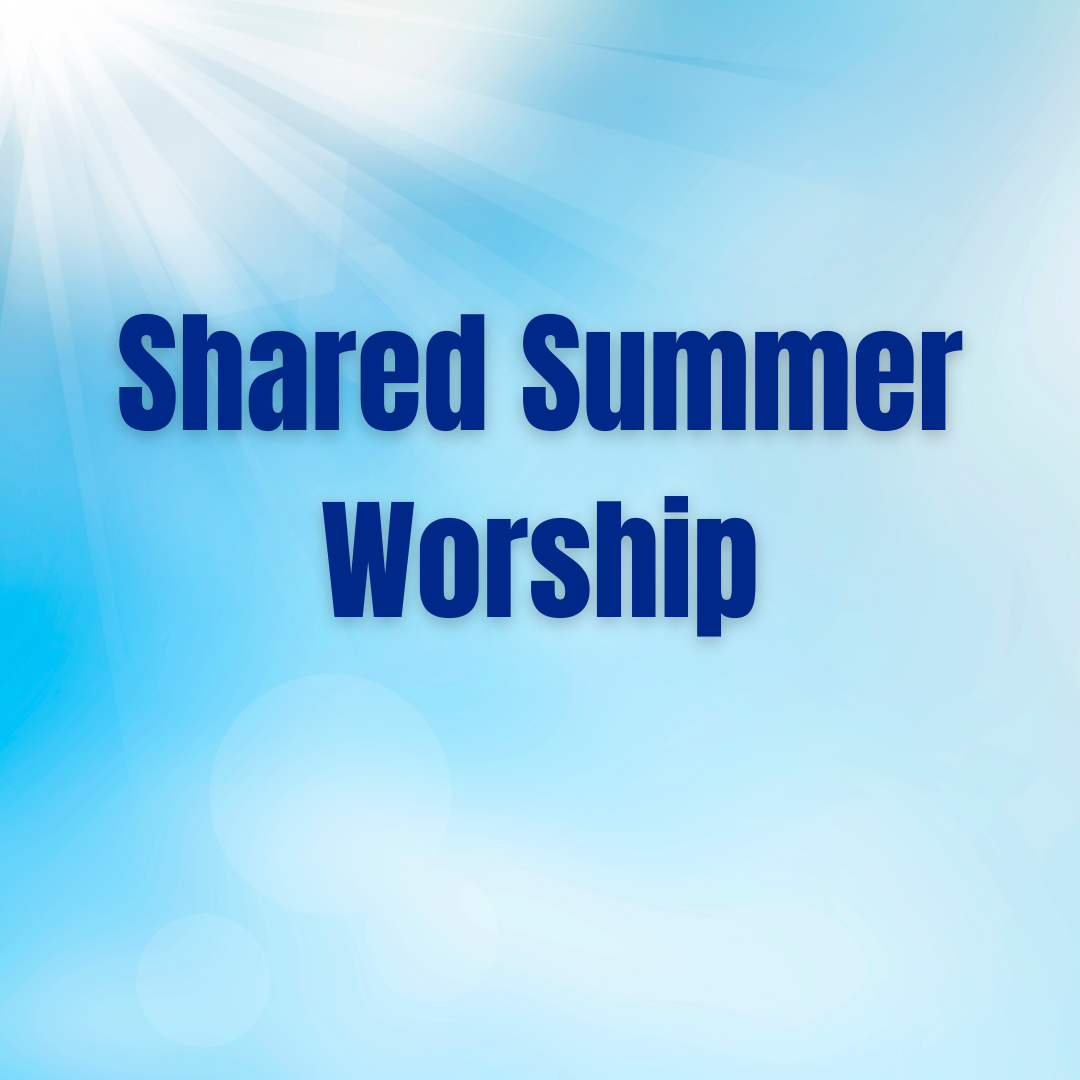 The link to worship for Sunday, August 1 will be available to view beginning at 10:30 on Sunday.  If you do not watch it when it ‘premieres’, it will continue to be available to watching later.

Prior to being invited to participate in the shared summer services, we and the music team had decided to offer a series on ‘The Lord’s Prayer’.  These are in addition to the shared Sunday worship.

We give thanks to God and celebrate the gifts of faith.

Esther and Emmett are spending time talking about the prayer Jesus taught his disciples.

Here is the link to Esther and Emmett talking about the Lord’s Prayer: (the script for this and for Jeff’s reflection are at the end of this message)

Lynne, Cheryl and Crystal share “A Mighty Fortress is Our God”

Matthew 6:9-13
“Pray then in this way:
Our Father in heaven,
hallowed be your name.
Your kingdom come.
Your will be done,
on earth as it is in heaven.
Give us this day our daily bread.
And forgive us our debts,
as we also have forgiven our debtors.
And do not bring us to the time of trial,
but rescue us from the evil one.

And the Music Team shares “Precious Lord, Take My Hand”:

The Prayer List is distributed separately and allows us to remember specific people with our prayers. If you want to receive the Prayer List, or add a name (with their permission), please be in touch.

Thanks again to everyone for engaging with us on this COVID-19 journey.  We are grateful to share ministry with you and really appreciate your efforts to stay in touch and to continue to care about TMUC with your prayers and your financial support.  Donations on PAR (note: the PAR program now accepts monthly credit card donations as well as automatic monthly bank withdrawals), Canada Helps  through www.canadahelps.org, e-transfers to the church’s email address: tmuc@shaw.ca, or cheques mailed to the church are making a difference. Thank you.

Again and again we are called to listen to words of reconciliation:

We are gathered for worship and work in Treaty One territory, which is the traditional land of the Anishinaabe, Cree, Oji-Cree, Dakota and Dené peoples and the homeland of the Metis Nation. For thousands of years Indigenous Peoples walked this land and knew it to be the centre of their lives and their spirituality. We respect the Treaties that were made on these territories, we acknowledge the harms and mistakes of the past, and we dedicate ourselves to move forward in partnership with Indigenous communities in a spirit of reconciliation and collaboration.

Here is the text of Esther and Emmett: “Teach Us to Pray”

Emmett: Hi Esther! I discovered something!

Esther: Hi Emmett! What did you discover?

Emmett: Well, remember we once talked about that guy Nick who came to talk to Jesus at night?

Esther: Yes, his name was Nicodemus.

Emmett: Right – that’s the guy. Anyway, did you know that he said that Jesus was a teacher?

Esther: That’s right. Nicodemus said that Jesus was a teacher sent from God.

Emmett: So, if Jesus is a teacher, he can teach us stuff, right?

Esther: Yes…is there something you would like Jesus to teach you?

Esther: Did you know that Jesus’ disciples did ask him to teach them ‘one ‘thing?

Emmett: They did! Did they want to learn to play the trumpet?

Esther: No, they asked Jesus to teach them how to pray.

Emmett: How to pray!  That’s a good question too! Did he teach them how to pray?

Esther: Jesus did…in fact, he taught them a prayer they could say.

Esther: I think you know this prayer. It begins: “Our Father, who art in heaven…”

Emmett: Oh, I do know this prayer. We say it in church and in Sunday School and at Messy Church.  But Esther, can I ask you a question about what this prayer says?

Esther: Sure Emmett. What’s your question?

Esther: Yes, there was.  Jesus lived in a region that was ruled by the Roman Empire. The Roman Empire had conquered the land and now many people were poor. Augustus was one of the rulers of the Romans, and he had officially been given the title of ‘father of the country.’

Emmett: Oh, I see. So when Jesus said that God is ‘our’ Father, it meant that God should be in charge, not the ruler of the Roman Empire!

Esther: Right. And the prayer goes on:
‘Our Father, who art in heaven
Hallowed be thy name.”

Esther: Jesus was saying that God is awesome!  Then the prayer says:
“Your kingdom come, your will be done
on earth as it is in heaven…”

Emmett: In heaven?  Is that where God lives?

Esther: What do you think?

Emmett: Then the prayer says:
“Give us this day our daily bread…”

Emmett: Jesus did that. He was always feeding people.

Esther: The next part is a little trickier:
“Forgive us our trespasses, as we forgive those who trespass against us”.

Emmett: Hey, I once saw a sign that said “No trespassing.”  Do you think God put up that sign?

Esther: Not likely.  We trespass against someone when we treat someone badly.  Jesus taught us to learn how to forgive each other, rather than always try to get even with someone.

Emmett: Jesus also told us that God forgives us – like that story he told about the son who left home and wasted all his money, but his father forgave him and welcomed him home!

Esther: And then the prayer says:
“Do not lead us into temptation, but deliver us from evil; for thine is the kingdom, the power and the glory, forever and ever. “

Esther: Yes.  We pray that God keep us safe and we remember that this is God’s world and God’s creation.

Emmett: Wait …that can’t be the end.  Don’t prayers end with one more word?

Here is the text of Jeff’s reflection

This happens regularly in the writings of the Old Testament.

We can see this in a number of the Psalms:

Psalm 68:
“Make a joyful noise to God, all the earth
Sing the glory of God’s name”

Say it once, then say it again, only with different words.

We find this language pattern in the words of the Lord’s Prayer that we consider today:

“Your kingdom come your will be done on earth as it is in heaven.”

‘Your kingdom come” equals “your will be done on earth!”

Most North Americans don’t have first- hand experience of kingdoms. There is the British Royal Family, and there are a number of other countries with royal families – Norway, Belgium, Denmark, Saudi Arabia – to name a few.

The next line of the prayer helps – your will be done on earth as it is heaven.  Okay, so if God’s kingdom coms on earth, then earth will apparently run as efficiently as heaven does, and people will do what God wants them to do; we will live as God wants us to live.

Some contemporary translators try to convey the sense of God’s will be done by changing the word ‘kingdom’ to the word ‘kin-dom’ (K-I-N), praying ‘thy kindom come’, as a way of saying that God’s will is that we recognize each other as children of God and that God’s will is lived out when we live in neighbourly and just relations. It’s another way into understanding the prayer.

For Jesus’ disciples, I think the word ‘kingdom’ had historical and contemporary connections. Originally, the slaves who followed Moses out of Egypt live as tribes and extended families, with leaders arising and being appointed to deal with specific emerging situations or crises.

But they saw other people organized under the rule of kings – other countries with strong armies and impressive fortresses and seemingly strong economies, and they wanted to be like those countries, so they called out to God to give them a king.

God didn’t think that was such a good idea. God told the prophet Samuel to tell the people that being ruled by a king came with a price – kings conscripted youth to serve in their armies and security systems, kings taxed people to maintain the kingdom’s armies as well as the kings’ palaces their high standard of living, and kings would eventually want everyone’s land, and their crops, and their vineyards, because kings want to be king of everything.

Samuel told the people, they thought about it for a second or two, and then said – we want a king! We want to be like everyone else. So Samuel anointed Saul as king. Saul would be followed by David, who was followed by his son Solomon – who amassed great wealth and essentially became the kind of king that God had warned about.

But, in the time of Jesus, the people had a more concrete and immediate experience of living in a kingdom, because they were subjects of the Roman Empire, of Rulers proclaimed as gods or sons of gods, of a kingdom established and maintained by violence. Remember, Jesus will be executed as a prisoner of the Roman Empire – he would be crucified – a cruel and painful form of torture relieved only by the victim’s person’s inevitable death.

So, to pray “your kingdom come on earth” was not just to pray some pious words, it was to ask God to get them out of the kingdom they were in!

Rome’s kingdom might not be pleasant, but at least you could describe it on a postcard. What is this kingdom of God – a hidden treasure worth everything you have accumulated in life? A mustard seed – which produces a plant with some medicinal and spicey qualities, but which could also spread exponentially and take over any garden? A hit-and-miss growth potential in places of hard, unwelcoming and maybe rich soil?  A place where rather than growing up, you have to grow down and become a child?

We are left still wondering – this kingdom is not quite a program, not quite a place, not quite…well…not quite like any kingdom we have ever heard of.

But Jesus lived in this kingdom, lived doing the will of God, lived compassion, blessing, healing, befriending …and dying on a cross.

To pray “your kingdom come, your will be done on earth as it is in heaven” is not to state a creed, but to invite God to invite us into God’s way in the world: God’s strange way of weaving, folding, shattering, rearranging, hiding, revealing, of receiving welcome and receiving rejection, of hinting and surprising and …

To pray these words is to already open hearts and imaginations to the possibility of a new way of living, to an awareness of already having one foot on earth and one foot in heaven, to a faith that we live and love in God, and that whatever this kingdom of God is, it is already around, amongst and within us.

Thy kingdom come, thy will be done on earth as it is in heaven. AMEN